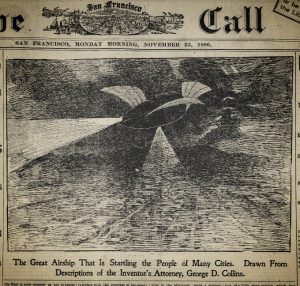 The history of UFO sightings and alien encounters as portrayed in the popular media is, mostly, separated into distinct periods: modern, from the late 1890’s airship flap followed by World War II “foo fighters” into post-1947 after the Kenneth Arnold report, and ancient interaction pieced together using “evidence” from the time of cave dwelling humans up to the time of the builders of cities and megalithic structures.  UFOs depicted in Byzantine paintings (misinterpreted conventional symbols) the 1561 report from Nuremburg, Germany and the 1566 report from Basel, Switzerland are often thrown in during reviews of UFO history but what about the time in between then and the 1890’s?  It turns out that there are quite a few reports from the period in question and they read like modern reports although they were written before the modern context of alien visitation. 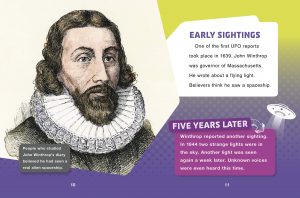 A 1639 journal entry by Massachusetts Governor, John Winthrop (considered to be America’s first UFO report) was mentioned in last week’s blog, which describes a sighting by one James Everell and two companions while in a boat on the Muddy River.  They claimed to have seen a luminous mass that changed size and darted back and forth over the water for three hours before flying away.  After the spectacle was over, they realized they were a mile upstream with no idea how they’d got there.  There are two more strange events in Winthrop’s Journal Volume II.  In the entry dated January 18, 1644, Winthrop described three men in a boat coming into Boston seeing two lights “in form like a man” rise up out of the water, float towards the town and then vanish.  The sighting lasted for “a quarter of an hour.”  He added that, “The like was seen by many, a week later, arising about Castle Island.”  He later added details to the last part describing a “light like the moon” rise up in the northeast of Boston and then meet “the former”, which, presumably, refers to the two lights seen on the 18th.  The lights reportedly came together and separated several times while periodically shooting out flames and “sparkles.”  Then a voice was heard “calling out in a most dreadful manner, ‘boy, boy, come away, come away.”  The voice was described as being over the water and shifting location over “a great distance.”  More citizens reported hearing the same voice two weeks later on the other side of town and Winthrop speculated that a man “who confessed himself to have skill in necromancy” may have been the cause.  That Winthrop, a devout Puritan, didn’t go any further than that is remarkable. 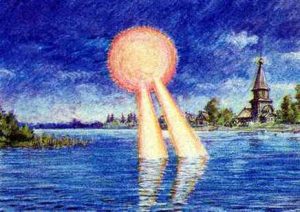 A sighting on August 15, 1663 in Roboziero, Russia comes from a report from Saint Cyrille monastery by one Ivachko Rievskoi.  It relates the account of a farmer, Lievko Fierdorov, of a large ball of fire that flew south over a lake and then disappeared.  It reappeared on hour later, this time flying from south to west and then a third time it was increased in size and hovered over the lake for an hour and a half emitting intense heat and illuminating the water to a depth of 30 feet before dissipating.  Rievskoi sent a letter to priests in the area and they confirmed that they’d “had such a sign in that day.”

In a letter to the president of the Royal Society, astronomer Thomas Short describes seeing strange red “streamers” emanating from “blood-red” clouds in the west at 5PM on December 5, 1737 over Sheffield, England.  He wrote that the streamers were unlike the Aurora Borealis as they were “waving” as opposed to “dancing with sudden occursions.”  The same phenomenon then appeared in the north and the streamers from both the west and the north went towards and passed each other.  The streamers in the west stopped while the north “weakened” and activity shifted east between 7 and 8 PM.  Finally, things moved to the southeast where the remainder of the activity occurred until 10:30 PM.  In a listing of the “chief remarkables of this meteor” Short wrote that the streamers came from deep-red clouds, which hid a “luminous body” so bright he could have read by it.

A letter from a clergyman at the University of Zamora in Spain printed in the July 10, 1788 London Times (source cited by Jaques Vallée in “Wonders of the Sky” case 363) recounts a June 12, 1788 sighting there.  According to the letter, two “globes of fire” moved horizontally, came together violently and then separated with both having changed course.  One moved southeast and blew up with a loud report while the other, traveling northwest, continued until it was out of sight. 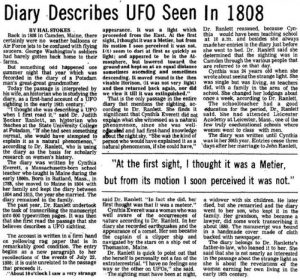 A description of a sighting in 1808 by a school teacher in Maine was found in a diary by a woman in the course of her research into women’s history.  As reported in the March 28, 1978 edition of the Potsdam, NY paper, Courier Freeman, historian Dr. Judith Becker Ranlett was in the process of transcribing the 600-page diary of her husband’s great-great grandmother, Cynthia Everett, who was a schoolteacher in Maine, when she came across an entry that read like a UFO report.  On July 22, 1808 Everett wrote, “About 10 o’clock I saw a very strange appearance. It was a light, which proceeded from the East. At the first sight, I thought it was a métier [meteor], but from its motion I soon perceived it was not. It seemed to dart at first as quickly as light; and appeared to be in the Atmosphere, but lowered toward the ground and kept on at an equal distance sometimes ascending and sometimes descending.”

In the July 2, 1853 edition of Scientific American an article titled “Singular Phenomenon” begins, “We have received a letter from Professor A.C. Carnes, of Burritt College, Tenn., with the following account of a singular phenomenon, that was seen by a number of the students on June 1st, at 4 ½ A.M., just as the sun was rising.”  The letter tells of two lights that were seen to dramatically change shape.  One got smaller and vanished while the other appeared “globular” and then “elongated parallel with the horizon.”  Then the vanished light reappeared and grew larger while the other light diminished and vanished.  This continued for half an hour with the lights staying in their locations in the midst of “considerable wind.”

An article in the July 3, 1893 Tacoma Daily Ledger tells of a particularly strange and violent experience had by five locals and two visitors from the east coast.  The story is told by one of the eastern gentlemen who declined to give his name though the locals are named in the article.  According to the man’s story, they set sail at 4:30 P.M. on July 1st on a fishing and hunting expedition aboard the sloop, “Marion” into the sound.  They dropped anchor and had some success with the fishing but the wind picked up and they weighed anchor at 8:00 and headed for Henderson Island, which they reached at 9:30.  They set up camp on the Island next to the camp of a party of surveyors who had already retired.  The group turned in at around 11:00  but, sometime after midnight, they and their neighbors were awaked by a horrible noise.  The air “was filled with a strong current of electricity that caused every nerve in the body to sting with pain.”  There was a blindingly bright light that flashed and they saw it was coming from the head of a “monster fish” 150 feet long and 30 feet in diameter with copper bands all along its body with a propeller for a caudal fin.  A man from the surveyors’ group approached and was blasted unconscious by a stream of water from the “fish” as was one from the “Marion” party who attempted to rescue him.  As the others ran for the safety of the woods they turned and saw the monster disappear beneath the water.  They returned to revive the fallen men and later all noted that their watches had stopped.

There are many other cases (Valées book is a good source) but a lot of them could easily be misidentified natural atmospheric or astronomical phenomena or invented.  Looking through the reports is very much like reading through Project Blue Book or the case files of MUFON.  The absence of the idea of alien visitation removes that sort of speculation and the reports tend to stick to presenting the observations in a just-the-facts manner.  The mystery has deep roots and the mystery endures.