Last week’s blog was about a case involving police officers in Ohio, who sighted and chased a UFO.  They later cooperated with investigators by agreeing to be interviewed and provided a police dispatch center tape that had recordings of transmissions made during the event.  This week’s blog covers a case so similar, that it’s quite possible to confuse it with the Ohio case but, in some ways, it’s even more extraordinary. 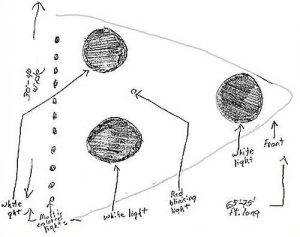 Two states over, in Illinois, a series of sightings by police officers in multiple jurisdictions was started off by a trucker, Melvern Noll.  Noll had stopped on the way back from a delivery to check on a business he owned in the city of Highland, which was a miniature golf course with adjoining go-kart track and video arcade.  It was around 4:00 am on January 5, 2000 and Noll was concerned about the possibility of frozen pipes.  As he exited his vehicle, a light he assumed was a star caught his eye because it seemed to be low.  As he returned, he noticed the light was moving towards him and when it got close he saw it was a craft that was “like a two story house with a little penthouse on top” that had six to eight windows.  The windows were evenly lit with a white light and there was a circle of “custard-red lights” on the bottom.  The object passed slowly in front of him, just above some trees, made no noise and Noll noted that the trees were not swaying.  As the object moved away, Noll noted that its rear also had a series of “windows.”  Feeling that what he had seen was highly unusual, Noll decided to report it at the local police station in the hopes that someone else would see the object and corroborate his story.

At 4:11am, Tina Joaquin at the St. Claire County 911 dispatch center received a call from the Highland Police Station asking her to dispatch an officer to check out Noll’s report.  Jaoquin contacted Officer Ed Barton and as she describes the report, laughter can be heard in the background on the dispatch recording that was obtained by a researcher using the Freedom of Information Act.  Ed Barton can be heard asking if it was a joke, and after being assured that it was serious he asked if the trucker was DUI and what he was supposed to do with the object if he found it.  Joaquin asked if he wanted a number for a UFO reporting center and he replied that if he saw it he wouldn’t say a word about it.  Later, in a filmed interview, Barton would point out that he’d obviously changed his mind as he was in the midst of speaking about the events with multiple interviewers.

As he was driving, Barton sighted two large lights with rays emitting from them “like a Japanese battle flag.  The lights then took on a cigar shape, moved towards Barton and he pulled over and shut off his vehicle and flashers.  As the lights got closer Barton exited his vehicle and saw they were part of a huge, silent triangular craft the size of a football field that stopped in front of him, made a flat turn and moved off towards the southwest.  Barton reached into his vehicle to grab his radio and when he looked up “2-3 seconds” later, he saw the craft was now positioned over the town of Shiloh 6-7 miles away.  Barton alerted dispatch that he had seen something strange and that an officer in Shiloh should, at that point in time, be able to observe it.

In Shiloh, Officer David Martin responded that he was observing it and didn’t know “what the heck it is.”  In later interviews, Martin describes seeing a huge “arrowhead-shaped object” floating “gradually west, southerly,” silently with three lights lighting up the sky beneath it.  As he was thinking about taking a picture of the object, it suddenly moved far away “in the snap of a finger” which left him dumbfounded.  Martin emphasizes that there was no sound coming from the object and that it was 75 to 100 yards wide but he couldn’t discern a length.

At approximately 4:39 am Officer Craig Stevens in Millstadt, observed the craft and reported in subsequent interviews that it was huge, arrowhead-shaped, slowly moving about 500 feet above the ground, and that the concave rear of the object had three bright lights with a light moving across that was dim when it was on the edges of the object and brightened towards the center.  He described that the object banked and headed north and then northwest towards Dupo. As it moved away, Stevens thought to retrieve a Poloroid camera from his trunk and get a picture.  The resulting photo is very poor due to the cold and the fact that it was night but at least shows some lights and that something was there.

In Dupo, Officer Matt Jany sighted the object but it was at such a distance that he needed to use binoculars to see it.  He reported that its lights were brighter than usual for a plane but that its height of 500 feet was not unusual.  He was then informed by dispatch that Lambert Airport had reported there was nothing in the area at that time.  Additionally, local Scott Air Force base claimed to have been out of operation at the time.

Officers Barton, Martin and Stevens did what all UFO witnesses should do and drew sketches of what they had seen.  The sketches are similar and seem to depict the same object.  These would later aid documentarians in illustrating the object in video format.

The local press picked up the story and initially treated it with respect.  It got the attention of the National Institute for Discovery Science founded by hotelier, Robert Bigelow and investigators with that organization were the first to arrive and conduct interviews.  NIDS released reports on the event covering various hypotheses and they concluded that the officers had seen an experimental stealth blimp designed by the Aereon Corporation in Princeton, New Jersey.  Although it was considered for production by the military, the Aereon blimp was ultimately rejected.  Later investigators pointed out that the accelerations observed would have destroyed a blimp and a spokesman for Aereon stated that they had never built the blimp and that if someone else had, it was still patented and its existence would constitute an infringement.  Despite the problems with the blimp explanation, the press, a lot of the public and even some witnesses, became comfortable with the explanation that they’d seen some sort of experimental aircraft.

There is an excellent article in Riverfront Times, for those interested in looking into the case in more detail, and two documentaries; “The Edge of Reality: Illinois UFO” made shortly after the event and “UFO Final Frontier: UFO Over Illinois” produced by the Discovery Channel some time later.  Of the two documentaries, this writer prefers the first because of its immediacy and no frills, low budget production.  “The Edge of Reality: Illinois UFO” was made for DVD by Darryl Barker who wrote and also narrates and Barker is the person who obtained the police dispatch recording.  Barker had an artist interpret the witness descriptions digitally and he incorporates the illustrations into footage of the witnesses in location.  The interview footage is done partly while riding in patrol cars and at the various sites and partly in the police stations involved.  The officers are in full uniform and that the police departments allowed the use of their facilities and vehicles shows an amazing level of cooperation with investigators and support for their officers.

The Discovery Channel production is a slicker, higher budgeted version of the same story and provides additional witnesses.  Again, the police departments involved were highly cooperative.  The producers turned to a computer animator, David Massa, to come up with illustrations of the reported craft.  Massa’s company, Sigma Animations, specialized in legal cases and great care was always taken to accurately recreate events.  Massa used expensive laser arrays and surveying teams to gather necessary data, rendered images of the sightings and had the witnesses provide feedback until they were satisfied.  Interestingly, the resulting animations are very close to the ones created by the artist working for Barker who probably cost a whole lot less.

The police officers’ testimony is quite compelling and they unquestionably saw something that they couldn’t explain and that has, so far defied a satisfactory explanation by others.  Officer Ed Barton’s testimony is most notable because of his background as a “military brat” who grew up on bases and developed the ability to identify aircraft by their engine noise.  Unfortunately, Ed Barton died in 2005 at the age of 39 due to a heart attack.

All of the officers and witnesses became local celebrities.  Melvern Noll happily recounted his story to all interested and reported that one impromptu audience kept he and his wife in a restaurant for an hour and a half.  That local police departments would be so open about UFO sightings by their officers makes sense despite the national policy of downplaying such incidents.  It seems that local pride and support for members of their own community prevail over pressures from State and National agencies.