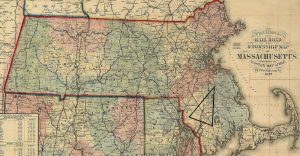 In last week’s blog a UFO park and marker designating the sight of an encounter in Sheffield, Massachusetts was spotlighted.  Massachusetts holds a special place in UFO history as being the state where this country’s very first recorded encounter occurred.  As of this writing, the state ranks in the top 34% for sightings reported to the National UFO Reporting Center, which is high for a state of its size.  A classic 1952 UFO photo comes from the state and in March of this year an extraordinary close encounter case there was reported to the operators of the website UFO Giant.  Massachusetts is also home to two paranormal hotspots where activity includes strange creatures and UFOs with one of them being just outside of Boston. 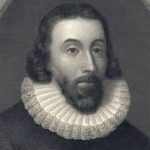 Just about every UFO history review starts with the late 1890’s airship flap and then moves on to World War II foo fighters.  What may surprise many UFOlogists is that there was a 1639 encounter that was recorded by John Winthrop who was Governor at the time.  On page 294 of the 1908 Charles Scribner’s Sons edition of “Winthrop’s Journal:  History of New England 1630-1649 Volume I”, there is this entry which reads very much like a modern case report:

In this year one James Everell, a sober, discreet man, and two others, saw a great light in the night at Muddy River. When it stood still, it flamed up, and was about three yards square; when it ran, it was contracted into the figure of a swine: it ran as swift as an arrow towards Charlton, and so up and down about two or three hours. They were come down in their lighter about a mile, and, when it was over, they found themselves carried quite back against the tide to the place they came from. Divers other credible persons saw the same light, after, about the same place. 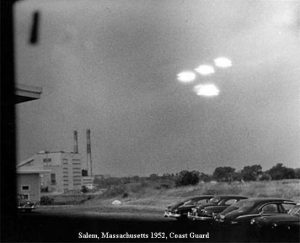 A classic UFO photo was taken in Salem, Massachusetts on July 16, 1952 by USCG seaman, Shel Alpert.  Alpert was on duty in the Coast Guard Weather Office when he saw four brilliant lights in the sky that dimmed and then brightened.  Alpert got a picture through an office window.  The photo was submitted to the Air Force and became Project Blue Book Case 1501.  An initial analysis concluded that the photo was “probably” a double exposure hoax and a subsequent analysis concluded it was “probably” reflections of street lights in the window.

There is an area in Massachusetts known as “The Bridgewater Triangle” that was defined by cryptozoologist, Loren Coleman in his 1983 book, “Mysterious America.”  Within the lines drawn between Abington, Rehoboth and Freetown there is the Hockomock Swamp which, during “King Philip’s War” in 1678, was a last refuge for the Wampanoags .  Hockomock is an Algonquin term meaning “place where spirits dwell” and the swamp and surrounding area constitute a hotspot for paranormal activity including ghosts, animal mutilations, cryptids and UFOs.  A case reported by the Boston Magazine in 1980 involved a police sergeant, Thomas Downey who said he came across a six-foot tall winged being while driving one night on a road in the area.

Another reputed hotspot is around the town of Leominster, Massachusetts, which has earned it the nickname, “Leomonster.”  Strange happenings there have been chronicled by author, Ronny LeBlanc in his 2016 book, “Monsterland: Encounters with UFOs, Bigfoot and Orange Orbs.”  He begins the book with his own encounter as a young boy with something he couldn’t see violently pushing trees and shrubbery out of its path.  This occurred in an area of Leominster State Forest that some locals call, “Monsterland” due to numerous encounters with Bigfoot type creatures.  In a Boston Herald article, reporter Alexi Cohan mentions being taken by LeBlanc to St. Leo’s Cemetery located in the town on Lancaster Street.  LeBlanc told Cohan of a 1960’s case there where a couple saw a flying saucer come out of the fog which the man reported to the police.  The man claimed that when he pointed at the saucer, his hand was frozen and remained that way until the saucer flew away. 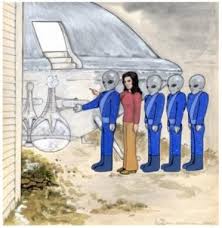 A few miles to the northwest is the town of South Ashburnham, which was the location of one of UFOlogy’s most enduring abduction cases.  According to the story, at 6:30 PM, On January 25, 1967, Betty Andreasson was in the kitchen of her house while the rest of her family, seven children, her father and mother, were in the living room.  The lights in the house began blinking off and on and then a bright red beam shone into the house through the kitchen window.  Betty went to comfort her children while her father ran into the kitchen to look through the window.  When he did he saw five creatures hopping towards the house.  The creatures then moved through the closed kitchen door and, with the exceptions of Betty and her father, the entire family went into a trance.  Betty and her father were individually engaged in telepathic communication by two creatures and when Betty began to feel concern for her family, her 11 year-old daughter was momentarily released from her trance to reassure Betty that no harm was being done.  Betty and her father described four creatures as having been four feet tall and that one, which they felt was the leader, was five feet tall.  They recalled that the creatures wore blue coveralls with the logo of a bird and a wide belt, had three fingers, pear-shaped heads with wide eyes and slits for mouths and that they floated rather than walked when they moved.

Betty said she was taken by the creatures to a waiting 20-foot diameter craft, subjected to a physical examination and then brought back to her house by two creatures.  According to her, a creature had stayed with the family and when she entered the house the family was released from their trance and the creatures left.

Eight years later, Betty responded to an article about UFO researcher J. Allen Hynek by sending him a letter describing her experience.  Hynek initially rejected the story as being too bizarre to be believed but later contacted researcher Raymond Fowler, who lived near the Andreassons, and asked if he would be willing to investigate.  Fowler agreed and chronicled the case in a 1979 book, “The Andreasson Affair.”

A 2017 sighting report with a photo from Leominster can be found on the website “UFO Sightings Daily” which indicates that activity continued up to recent times and the town was, appropriately it seems, the location for the 2019 Greater New England UFO Conference.

A sighting that occurred at 10:30 PM on March 3, of this year, is reported on the website UFO Giant.  The witnesses claim that the four of them were watching television when they were distracted by bright light coming from the woods that changed colors from blue to white to orange.  They left the house to investigate and, as they approached the light, it suddenly went dark.  They then saw that they were about fifteen feet away from a solid craft, 10 feet in diameter and four feet tall.  One of the witnesses approached the craft to touch it but, when he was three feet away, a blue light came out of the top and an “energy pulse” knocked all four witnesses down causing them to lose consciousness.

Massachusetts may be a small state but its contribution to American history has been huge and for UFOlogists, Massachusetts is the state where the history of American UFOs began.