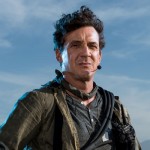 Recorded Live 12-16-15, Alejandro Rojas with the news, and James Fox talks about his upcoming movie, 701, and what it was like interviewing incredible witnesses for Out of the Blue, I Know What I saw and more. He further discusses the danger of having UFO evidence, and cases involving close encounters of the third kind, he says his best footage is yet to be released and you can look forward to it in 701 in the next year or two!  For more info, go to the show notes below. If you have not become a supporter for only $2 per month or more, you will really want to for the second part of this interview.