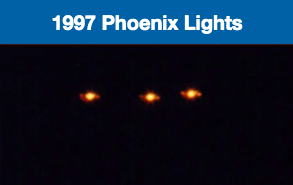 The Phoenix Lights is a classic case among UFOlogists and one of those where you quote the date (March 13, 1997) when mentioning it if you want to impress upon your fellows that you know your subject.  It involves a night of sightings by thousands of Arizona residents, including Governor Fife Symington, of a huge V-shaped craft that was defined by lights on it edges and blocked out stars as it passed.  It made national news and became the subject of the 2009 television movie, “I know What I Saw.”  The case was explained away as being a misidentified military flare drop, which happened two hours after the sightings reports.  The flare drop was localized, while the reported craft was said to travel across the entire state and, despite the incongruity, enough of the public accepted the explanation that the case was able to fade into history.

Similar sightings of huge V-shaped craft by thousands of witnesses along the Hudson River Valley occurred in the early 1980’s.  This was not just over a single night but over a period of years and should have overshadowed the Phoenix Lights in UFOlogical circles, but many don’t even know where the Hudson Valley is let alone that there was a fascinating series of sightings there which are being investigated to this day.  Even now there is still activity in the small area town of Pine Bush that holds a yearly UFO fair.  To give you an idea where the HRV is located, the Hudson River meets the ocean just past New York City.  The valley runs north up to Albany with New York State to the west. END_OF_DOCUMENT_TOKEN_TO_BE_REPLACED 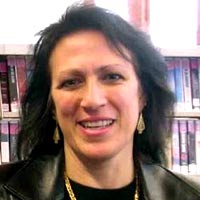 Linda Zimmermann, who specializes in UFO sightings reports from New York’s Hudson River Valley, has often mentioned her amazement at how much activity there was in her “own back yard.”  That got me to wondering what there was in my back yard.  I live in Queens, so Hudson River Valley is my north 40 and my backyard is Long Island.  For those of you who aren’t familiar with this area, Manhattan is across the Hudson River, east of New Jersey and Brooklyn and Queens are across the East River east of Manhattan on the western tip of Long Island.  It turns out that Long Island is a great place to be for someone with an interest in UFOs, with plenty of sightings and a lot of craziness.

A very old classic case reported Sept. 12, 1880 in The New York Times involved not a flying object but a flying man. The article begins, “One day last week a marvelous apparition was seen near Coney Island. At the height of at least a thousand feet in the air a strange object was in the act of flying toward the New Jersey coast. It was apparently a man with bat’s wings and improved frog’s legs. The face of the man could be distinctly seen, and it wore a cruel and determined expression.”  It goes on to speculate as to who the mystery flyer might be and settles on a “Mr. Talmage.”  Alex Wallach, who writes for untapped cities, investigated and concluded that the person referred to was probably Thomas Dewitt Talmadge, a notorious preacher in Brooklyn Heights known for his “acrobatic” preaching style, who was trained in gymnastics and promoted physical fitness.  There are articles from the time period mocking him in various ways and when reading the entire New York Times piece with this in mind, it seems that this is one of those and that the flying man was an invention by the writer to this end.

END_OF_DOCUMENT_TOKEN_TO_BE_REPLACED

Subscribe to our full two-hour shows for two dollars per month or more. Alejandro Rojas with UFO Updates, guest Linda Zimmerman first weighs in on the Secret Pentagon UFO search and what that has changed for us all who seriously look into the topic, her own personal sighting and then about her 20 + years of investigating Ghost cases, Graveyards, Asylums, and Crime Scenes. She personally experienced many strange encounters and haunts. 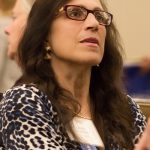 Alejandro joins for a chat, Linda Zimmerman discusses personal interviews for her most recent book: More UFOs over Hudson Valley. Listen n as she talks about one of the most underrated UFO hotspots in the world.