Subscribe to full shows for $2 or more per month or yearly subscriptions starting at $15  BONUS SHOW…. HOUR ONE: Alejandro Rojas with UFO Updates then guest Erling Strand who just returned from Hessdalen Valley, Erling discusses the mysterious ongoing unknown atmospheric phenomena being researched through Project Hessdalen known as the Hessdalen Lights, UFODATA and more.  HOUR TWO (Live): Dr Seth Shostak discussing SETI, his popular podcast, Big Picture Science and his thoughts on UFOs since the US government has been taking them more seriously.

ERLING P. STRAND: received a M.SC.EE. degree in 1981 at the Norwegian University of Science and Technology. Since 1988 he has been a lecturer and is an Asst. Professor at the School of Computer Sciences, Østfold University College, in Norway. He is also one of the founders of Project Hessdalen and, since 1993, the project manager. The main goal of the Project is to learn more about the mysterious lights in the Hessdalen valley in Norway.

END_OF_DOCUMENT_TOKEN_TO_BE_REPLACED

Listen to the podcast here.

Martin: And I’m calling you in Mountain View, are you, California?

Martin: I, actually, lived north of there, and I remember Mountain View has some beautiful homes – really nice area.

Seth: It’s not too bad. We have the Googleplex is here. There are a lot of other companies that people may have heard of if they’re among the digirati. Yes, it’s a nice place.

Martin: Yes, I lived in Tiburon, North of there.

Martin: Yeah, it was pretty nice. I would like to talk to you about UFOs quite a bit, today, but, first of all, I’m thrilled to have an astronomer on because I’ve been a fan of astronomy. Before we talk about UFOs there’s just a couple of questions I have. I’m going to be a little bit hypothetical, here and there, but do you ever think there’s a chance another theory will come alone that’ll disprove The Big Bang Theory?

Seth: Well, one should never say never when it comes to such things, but the history of science and, in particular, the evidence that’s presented for The Big Bang suggests that The Big Bang, yes, is – it’s going to survive. Now, it’s, undoubtedly, going to be modified. It’s somewhat akin, I think, to Newton’s dynamics. When Newton worked out The Law Of Gravitation and what kept the planets in orbit and that sort of thing back around 1600, whatever, all right. That explained a lot of things. It wasn’t quite right. It turns out it didn’t include General Relativity. He didn’t know about that, and General Relativity makes some slight modifications to Newton’s Laws, but Newton works in 99.9% of all the cases that are germane to, for example, engineering here on Earth, and even for explaining the motions of the planets. They’re very, very good, so it isn’t that Newton was, really, wrong or that the whole idea was overthrown later. It was simply modified. I think in the case of The Big Bang there are things about The Big Bang we don’t understand. The early inflation, and so forth, seems to explain stuff, and this, that, and the other. Will it go away? I don’t think so because you can see the universe is expanding. You can see the fact that there’s so much helium in the universe, and so forth and so on. There are all these pieces of evidence that support The Big Bang. It will be modified but I don’t think it’s going away.

Martin: Now, if you had to come up with something of what was happening before The Big Bang what would that be? And then we can move on to –

END_OF_DOCUMENT_TOKEN_TO_BE_REPLACED 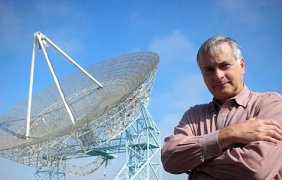