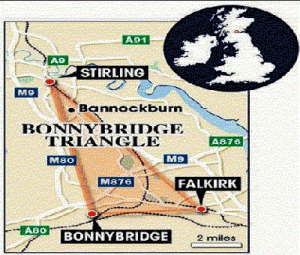 In listings of top UFO hot spots around the world, the small town of Bonnybridge, Scotland is frequently included.  Bonnybridge lies within an area known as “The Falkirk Triangle” which is described variously from being a large area defined by lines drawn between Edinbugh in the east, Glasgow in the west and Stirling in the north to a smaller triangle formed by three roads: the M8, the M9 and the M80.  The area has a history of many sightings and episodes that were exceedingly strange and the citizenry of the town of Bonnybridge has petitioned a succession of British Prime Ministers for an explanation. 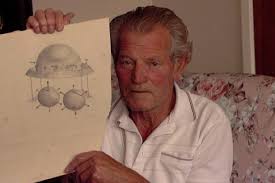 Notoriety first came to the area in 1979 with the November 9, encounter in Dechmont Woods in Livingston, West Lothian by Robert Taylor.  Taylor was a forester and was on his rounds at 10:30 AM in the company truck with Lara, his Irish Setter.  According to him, he went into a section just south of the M8, got out of his truck and walked down a path with the dog for about 700 yards.  In a clearing, he came upon an object hovering around 50 feet in the air that was dome-shaped with a flange around its base that had cross-shaped objects projecting from it.  As he watched it, with his dog barking excitedly, different sections would fade out, revealing the trees behind them, and then fade back in.  Then, two objects that looked like WWII sea mines with about six spikes sticking out of them fell from the bottom of the craft and hit the ground with a thud.  They then rolled towards Taylor and each object used a projectile to grab him at the hips and pulled him.  Taylor described an acrid smell and then losing consciousness.  When he came to, the objects were gone but there were indentations in the ground and marks similar to caterpillar tracks.  He had a grazed forehead and chin and his heavy-duty work pants were ripped at each hip.  He went to his truck to radio back to the office but found he couldn’t speak.  Taylor then started the truck and ended up backing into a ditch, which forced him to walk the quarter mile to his house in the town of Deans. His wife was alarmed by his muddy and disheveled appearance and he told her he was “attacked by a spaceship” which she, naturally, didn’t believe.  Mrs. Taylor phoned a doctor who examined Mr. Taylor and found nothing wrong with him as far as any kind of brain or sensory issues.  The doctor suggested he go to a hospital for further tests and Taylor did so but left after becoming impatient while waiting to be seen.  Mrs. Taylor had also called Robert’s boss, Malcolm Drummond, who came to the house and listened to Taylor’s story.  Drummond knew Taylor to be an honest man and making up such a strange tale would have been quite out of character for him.  The case was reported to the police who investigated it as an assault case.  The “crime-scene” was cordoned off and evidence was recorded.  Significantly, the tracks that looked like caterpillar tracks showed no signs of an entrance or an exit.  There were also drag marks that supported the story of Taylor being grabbed and pulled. Taylor’s pants were subjected to forensic analysis in Edinburgh and the examiner determined that they were torn by something mechanical.  The dog, meanwhile, would never leave the house, even to relieve itself, for months afterwards.  In 2018, the West Lothian Council created a UFO trail in the woods to commemorate the event.