Check out our T-Shirts & More and save 20% for one more week with offer code: 20XKOUIY  https://podcastufo.nymblsites.com

SHANE RYAN is a teacher, writer, researcher and federal public servant in Australia. He has worked at Charles Sturt University, the University of Canberra, and the Australian National University, all in Canberra. Shane has worked as an information officer and researcher at the Embassy of Japan in Canberra, and he has also taught in schools in Japan and Australia. Shane completed a Diploma of Japanese Studies at Nanzan University, Nagoya, Japan; a Bachelor of Theology at Sydney College of Divinity, Sydney; a Master of Arts at Australian Catholic University, Canberra; and a Graduate Certificate in Teaching English as a Second Language and Foreign Language Teaching at the University of Canberra. He was working as a barristers’ clerk in Melbourne when he first heard about the incredible 1966 Westall Flying Saucer Incident in that city, for which he has now become the lead researcher. Shane was the principal researcher and narrator for the documentary on the Westall Incident, Westall ’66: A Suburban UFO Mystery, which was first broadcast on the Australian Sci Fi Channel in 2010. Shane has since made a serious study of other school-based UFO sightings around the world, such as the 1967 Crestview Elementary School Incident in Opa-Locka, Florida, USA, and other Australian sightings, from the 1960s era. Shane was instrumental in convincing local government authorities to establish Australia’s – and possibly the world’s – first UFO park and playground based on real events, at Westall in 2013, as a way of commemorating the events there. Shane appeared in both seasons of Discovery Channel Canada’s Close Encounters series, in the National Geographic UK TV Channel’s Invasion Earth series, Australia’s Network Ten’s Studio Ten program’s anniversary special on Westall, and on Japan’s Fuji TV Network’s What’s This? – Mysteries from Around the World program. He was also interviewed for James Fox’s upcoming feature documentary film The Phenomenon. There are also several TV and film producers currently planning projects to bring the Westall story to a wider audience. Shane lives in Canberra with his wife and two sons and works in the Education and Visitor Services team at Australian Parliament House.

Check out our blog: https://podcastufo.com/blog/westall-ufo/ 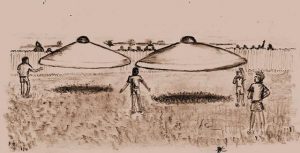 The first occurrence was April 6, 1966 at Westall High School in Clayton South, a suburb of Melbourne, capital of Victoria, Australia.  Around 11:00 am a student ran in from the school sports field (the oval) shouting that there was a flying saucer outside.  The teacher whose class had been interrupted demanded his students remain seated until the recess bell, at which time, students and teachers flooded the oval and over 200 people were witness to a silvery disk.  At the time, 5 light airplanes were attempting to get near the craft and it displayed extraordinary flight characteristics in evading them, which were described by teacher, Andrew Greenwood, to a fellow teacher arriving late to the scene.  Another teacher, Barbara Robbins, was reported by student witness, Graham Simmonds, to have been taking photographs of the object.  The object then flew to a wooded area called, “The Grange” where it landed and the students followed it.  By the time most of them caught up with the object it had lifted off but one student, “Tanya”, possibly had arrived early enough to see it landed.  The object flew off and the spot where it had been was reportedly marked by a swirled patch of grass. END_OF_DOCUMENT_TOKEN_TO_BE_REPLACED 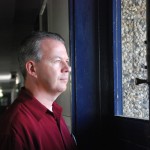 First Martin gives a hardy thank you to everyone for a banner year, then a fascinating interview with Shane Ryan, the Westall Flying Saucer Incident investigator.

For more information, go to the