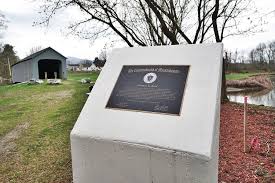 When a controversial subject is celebrated publicly it should be expected that there would be some public controversy.  A town in Massachusetts, Sheffield, recently made national news due to fighting over a monument, its relocation and eventual abduction by town officials. The monument in question is a 5000 pound concrete block with a plague that marks an “off-world incident” experienced by Thomas Reed on Sept. 1, 1969 when he was nine years old.  The monument was first located next to a replica of a historic covered bridge in a park created for it called, “UFO Monument Park.”  In 1969, Reed, his brother, mother and grandmother were in a car crossing the bridge when they spotted a “self contained glow” which then enveloped the car.  Reed next remembers being inside a large hanger-like interior and then being in the back seat of the car two hours later with his mother and grandmother having switched seats.  His grandmother contacted the police and later found forty others who witnessed a large, football field sized object in the area around the time of the incident. Some of those witnesses have been supporters of the monument and continue to testify that they saw something unusual that night.  What’s special about the monument is its plaque, which contains a citation from Governor Charlie Barker, which reads in part, “I am pleased to confer upon you this governor’s citation in recognition of the off-world incident on September 1st, 1969.”  The monument was initially relocated because of complaints by some that it detracted from the importance of the historical bridge.  It was moved to the private property nearby of a monument supporter but then found to be on a town right of way easement running through the property and, on June 4, 2019, it was removed by town workers and taken to an undisclosed location.  Reed has taken legal action against the town accusing its leaders of theft. END_OF_DOCUMENT_TOKEN_TO_BE_REPLACED 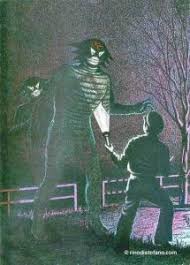 There are UFO cases noteworthy for their extreme weirdness that every UFOlogist is probably familiar with.  There is the 1952 Flatwoods Monster Case, the 1955 “Incident at Kelly”, and this writer’s favorite, the 1966 Point Pleasant, West Virginia case involving the Mothman.  Some might not be aware of a seriously strange case from Genoa, Italy known as “The Zanfretta Case.”  This case is chronicled in a 2014 English translation of a book by Genoese reporter, Rino Di Stefano appropriately titled, “The Zanfretta Case.”  The original 1984 Italian version was titled, “Luci nella Notte-UFO: il caso Zanfretta.”  The translation is a bit clumsy, which gives the book a certain charm, and has a forward written by the late Wendelle Stevens.  Stevens was a prominent UFO researcher and he wrote in his forward that he was excited by the case and invited Di Stefano and the principal witness, Pier Fortunato Zanfretta to his 1991 First World UFO Congress in Tucson, Arizona.

On Friday, December 8, 1978, a six column article titled, “Close Encounters in Torriglia” written by reporter, Enzo Bonifazi, appeared in the Secolo XIX, which was the “most widely read newspaper in the region of Liguria.”  Di Stefano describes conversations about the case taking place in the offices of his own paper, Corriere Mercantile, as being mostly dismissive.  Bonifazi had reported that security guard, Pier Fortunato Zanfretta had not only encountered a landed UFO, but had also come in contact with “a huge being, about three meters tall, with wavy skin as if it were fat or a loose sweatsuit and gray in any case.”  Italian militarized police, the “Carabinieri” had investigated after being alerted by Zanfretta’s security company, “Val Bisagno” and stated in their report that there had been witnesses in the area who had seen a “great light” over Torriglia around the same time that the events involving Zanfretta had taken place.  Di Stefano was intrigued by the case and asked permission from his extremely skeptical editor to investigate the case after hours, which was granted.  Di Stefano, a press photographer and a fellow reporter drove to the site and were impressed by a landing trace that had been described in the Carabinieri report.  On the frozen grounds of the Villa Casa Nostra, owned by dentist, Ettore Righi, was a semicircle approximately 3 meters across denoted by 15 centimeter wide line pressed 3 centimeters into the earth.

END_OF_DOCUMENT_TOKEN_TO_BE_REPLACED

Subscribe to our full two-hour shows for two dollars per month or more. Alejandro Rojas & Marc D’Antonio with UFO Updates, guest Nick Redfern discusses his new book, “Top Secret Alien Abduction Files: What the Government Doesn’t Want You to Know”  We also discuss all aspects of the abduction phenomenon, the Chicago Mothman and much more.